This post may contain affiliate links. You can view my full disclosure here.

This “Recent Reads” series are some of my favorite posts to write. I just love talking about books, haha.

I’m on track to beat my reading goal of 40 books for the year because I’ve been reading a lot lately. It’s something that really helps my mental health.

Again, most of the books that I’m going to talk about are suspense novels. 🙈

But here’s a look at what I’ve read recently!

• The Girl Who Played With Fire (Millenium, #2) 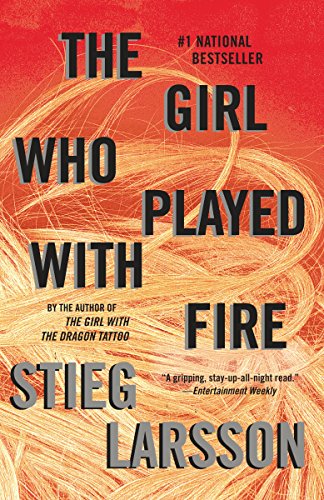 The Girl Who Played With Fire is the second book in the popular Millenium series (I talked about the first one here) but it can be read as a standalone novel. I thought it was really good, even better than the first! Mikael Blomkvist, a journalist, has decided to run a story that will expose a sex trafficking ring. Right before it’s supposed to be published, the two reporters responsible for the article are murdered. The prints found on the murder weapon match Blomkvist’s friend Lisbeth Salander. Blomkvist sets out to prove Salander’s innocence. Salander herself is drawn into a dangerous game of cat and mouse, forcing her to expose her dark past. I gave it 4/5 stars.

When I came across Just One Look, the plot sounded so interesting to me! Cassie Woodson recently lost her father, her boyfriend, and her job. As she attempts to pick up the pieces of her life, she lands a temp job sorting through emails for a law firm. She comes across the personal emails of Forest Watts, a partner at the firm. Cassie soon becomes obsessed with this seemingly perfect man, his perfect life, and his perfect wife Annabelle. She wants to become a part of his perfect life, and she’ll do anything to make that happen. I thought this book was good until about 80% through when everything just seemed to implode. It seemed like the author was maybe trying to take it in one direction but then didn’t know what to do, and everything changed. I gave it 3/5 stars because it was entertaining for the most part.

I thought The Ex Hex seemed like a light, fun read, which I needed. And I wasn’t wrong. It’s about a young witch named Vivi, who had her heartbroken by another witch named Rhys. Now, nine years later, Rhys is back in town to recharge the town’s ley lines. But after several mishaps, Vivi realizes that the silly little hex she put on Rhys 9 years ago might have worked. Now the two of them need to work together to lift the curse and save the town. I loved the whole witchy/Halloween vibe of this book. It was fun to read and I got through it fairly fast. If you’re looking for a fun, quick, spooky read – then this is perfect! I gave it 3/5 stars. [You can read my full review on Goodreads here.]

• The Girl Who Kicked The Hornet’s Nest (Millennium, #3)

The Girl Who Kicked The Hornet’s Nest is the third book in the Millenium series. The second book was probably my favorite, but this one didn’t disappoint! While the first and second books are two different stories, this one is a continuation of the second. It deals with the aftermath of the previous story and it all sort of comes to a conclusion. I don’t want to go into any more detail in case anyone is planning to read the series, haha. But it was good! I don’t think I’ll continue the series because every book after this was written by a different author. But I’m happy that I read the first three and I gave this 4/5 stars!

• The Diary Of A Young Girl

I had heard about Anne Frank’s story in school, but I had never actually read through The Diary Of A Young Girl. I love this book for so many reasons! Anne’s diary is from such an important time in history. There are many lessons to be learned from this time. But beyond that, Anne was such a gifted writer! I found myself empathizing with the emotions she was feeling. She wrote about feelings of not belonging, having no one to turn to, family drama, and other relatable troubles many young girls face. On top of that, she had to deal with the persecution of her race and the fear that she wasn’t safe. I found myself doing tons of research while I was reading this. I wanted to know what exactly the annex looked like, what happened to Anne and others, how they ended up being found, etc. If you haven’t read this, I 100% recommend it for everyone! I gave it 5/5 stars.

I’ve had my eye on Adulting for a couple of years now and I finally ordered it on Amazon. I was honestly so excited to start reading it. I thought it would be a fun read, and that I might learn some things about this “adult” world, haha. Overall, I can see how it would be super helpful for a lot of people just starting out in life! I learned a few things that I’d never thought about before, like car maintenance and things I should keep in a fireproof safe. But I’m married and I’ve been an adult for a few years now, so other things like tips about cooking or romantic relationships weren’t relevant to me. Again, I see how they could be helpful to others though. One thing that really bothered me was that some of the tips seemed aimed toward a particular audience: college-educated, upper-middle-class women with high-paying careers. Tips like “keeping an emergency pair of heels in my car” just isn’t relatable to me or many of the adults I know, lol. I gave it 3/5 stars.

What are some of your recent reads? Do you want to read any of these books? Let’s chat in the comments!

Hi there, I’m Tami!
Artist / Blogger / Bookworm
I’m so glad you’re taking the time to read my blog and I hope you choose to stick around for a while. If you would like to learn more about me and what this blog is all about, click here!

Why Has Nobody Told Me This Before?